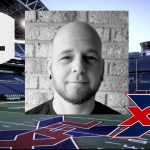 Josh started writing for us back in August of 2020 and wrote over 170 articles on XFL News Hub alone. On a personal note, he was my go-to guy, and I pretty much talked to Josh every day. I got to know him on a personal level throughout the years. He loved his kids very much. I would send him an article idea, and he would always be like, I’m picking up my kids, or we are out doing whatever, and I always told him family first, and thats who we was.

He came to us after trying to start his own football website. His goal was always to become a full-time football writer because he loved the game and loved telling the players stories and getting to know them. In a short time, he knew everyone in the TSL, XFL, FCF, and even the ELF. Because he was a good guy, cared about them, and wanted to tell their story. Mike Mitchell said it best, Josh was an underdog and always rooted for the underdog.

One of the hardest parts about this is we are right on the precipice of big things coming to Spring football in the US, with the XFL, USFL, and FCF making big moves. He would love to cover it all, be part of our daily chats in the XNH writers chat room, get to know more players and coaches, and tell their stories.

I pray for his family, friends, and kids at this time. I will miss you Josh.

If you want to help the family out at this time, you can donate to their fundraising page on Facebook. All the money goes to his funeral expenses and his kids. I know money was tight during this time for him, so anything fans can do will help. Let’s CRUSH that $10,000 goal.

Thoughts On Josh From Our XFL News Hub Family

“When I die, I’m goin’ out as the underdog who never lost hope” -Joyner Lucas.

Josh Davis was the ultimate underdog; he was a champion for underdogs and believed in redemption and multiple chances because he lived that life himself.

It’s why it’s poetic and fitting that Josh Davis was such a strong advocate for alternate football leagues. He loved the NFL and college football, but his true passion was for the leagues that gave players and coaches a second, third, and in most cases, a first chance that often alludes so many.

Josh Davis was a firm believer that the quality of football players didn’t end when the NFL finalized their rosters, which consist of less than two percent of all college football players. He was right.

Whether he realized it or not, Josh was fighting for himself when he fought for the overlooked, forgotten, and discarded. Josh was trying so hard to find his path in life by finding it for others.

Josh would always say to me in conversations and messaging. I want to be just like you.  When little did he realize that he embodied the very qualities of the players I admire. A fighting spirit to shine.

Admittedly, my favorite version of football is the pro and college game. But Josh rightfully saw way beyond that and was never snobbish about any football league. He saw all leagues on equal footing and knew that they were all avenues that kept hope and dreams alive.

When I think of the XFL, ELF, CFL, MLFB, USFL, FCF, IFL, or any other league with football players in it, I will always think of you, Josh. Thank you for opening so many eyes and bringing attention to all leagues. The landscape is going to miss you greatly. It needs more people like you.

Josh, I am sorry that your three daughters, your friends, and loved ones lost you for the time being. Your spirit and memory will always live on. You are always going to be a part of them and us, the community that embraced you and that you embraced back—much love, my fellow traveler. See you down the road. Rest in Paradise.

I got into sports writing because of Josh Davis. He had written articles about the FCF and I began to follow his work. Soon I found myself applying for XFL Newshub and its CFL counter part soon after. When Josh joined NFL Sapient, I quickly followed along. He helped me set up an interview with TSL O-Linemen Sean Brown. I look up to Josh, in a lot of ways.

As a writer he always wanted to showcase talented athletes, fought for player rights, and each article was well written whether an opinion piece or a news one. As a family man, the way he talked about his three girls and wife showed he cared. I don’t know much about his personal life, but I know he was a kind man. He helped others with their articles, was there for his family, and was kind and understanding to players and staff alike. Those who knew Josh are better because of it.

I will continue to aspire to be the kind of journalist that he was, and I will never forget the things he did. I wish nothing but the best for his three girls and his amazing wife. I love you Josh, might not have said it out loud but I felt it in my heart. I consider you an amazing coworker and a great friend. Rest in peace Josh.

Josh was a force of nature in getting to the bottom of a story, a true heavy hitter. His passion for the game and it’s players was only full display in his work, and he fully lived for the love of football.

Josh and I shared a love for alternative football and the Philadelphia Eagles. He was one of those guys who loved everything about football. He cared about the players and coaches. He wanted to tell their stories and help them reach their goals. His commitment and determination to break through in the football industry was something I always admired. Nothing was going to stop him from succeeding. He will be missed by many. My hope is we can do just as good of a job covering all football leagues as Josh did. Rest in peace Josh.

This had been a difficult morning collecting my thoughts, and words cannot truly express how much Josh Davis means to the world of Alternative Football.

Getting to know Josh over the last year since I started with the News Hub crew has been something I’ll never forget. Josh was never anything but kind to everyone I’ve seen him come across, and he truly wanted to see everyone succeed. He was always one of the hardest workers around and constantly put so much passion into whatever work he was doing.

Josh helped point me in the right direction so many times, as I’m sure he has for countless others. I will forever be thankful for what I’ve learned from him in the short time we’ve worked together.
Covering the ELF with Josh this season was honestly a treat, and I’m so sad that we won’t have him with us for all of the alternative football that is still to come.

The world was most definitely a better place with Josh in it, and I’m sure the way in which he’s touched so many people’s lives will not be forgotten.

My deepest sympathies to Josh’s family.

We will miss you Josh Davis. Rest In Peace.

Josh will be missed tremendously. Although I never met him in person you could still see how he acted and what he cared about. He constantly talked about his children and did everything he could for them. He was a hard working man who had passion for certain things and outside of his kids one of those passions was football. Josh was all over every single story with a drive and dedication. Josh will be missed. RIP.

You were a man that defined what a passion for football is. Even though I’ve always loved the game, you made me love it even more. Just two days ago, we were talking about the Alouettes together. Our friendship was too short, but it was more than meaningful. If it wasn’t for you and your endless knowledge, I simply wouldn’t be able to produce as much content. God will take it from here, and make sure that you can still watch all the football you want in heaven. Rest In Peace.

Tweets About Josh From The Football Community

Episode 109: We Are Ready Already!

The preseason is coming to a close and Week 1 is almost upon us! Get the latest depth chart news with St. Louis announcing their starting QB along with a brief fantasy toe dip. Also, we begin the preseason prediction process by picking top defenses, offenses, and XFL innovators. Get all that plus the latest […]

Preview of this week’s bonus episode where we ranked the XFL team uniforms. Go to patreon.com/thisisthexflshow for early access to weekly shows, full length bonus episodes, and all the football talk you can handle!