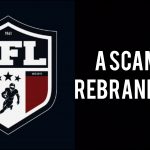 As of 8/17, what was once the website for the National Gridiron League has not been taken down. However, the site for their new venture – the United Football League is up and running.

To their credit, the site looks very professional. It refers to teams that were under the NGL umbrella as “joining” the new league, and considers the National Gridiron League as now defunct.

Attempts to reach the league were met with automated responses, but we do know that the same person responsible for 3 years of promises given to players and coaches never being fulfilled is still in charge.

Camps are being scheduled, with pricing between $100 and $125. We advise you not to waste your time and money.

Joe McClendon has put years into making deals with sponsors and not coming through, we have coaches who can attest that they were never paid.

After 3 years, they’ve never made it to training camp. Uniforms were never ordered. Hotel rooms were never paid for, and not a player or coach saw the practice field that they didn’t take it upon themselves to do.

No venue lease has ever been signed, and no team has ever played.

As of 8/20, there has been no movement to secure the trademarks for the UFL, nor United Football League, all are still under the status dead, according to the USPTO.

We write this as another warning that until it can be proven that they will ever play, please do not trust a thing that this league says.

As this story progresses, we will continue to bring you the latest, in hopes to limit those who become the next victim of this sham.

The post The NGL has Completed its Rebranding into the UFL first appeared on XFL News Hub.

STAMFORD, Conn., (February 7, 2020) – The XFL and Boom Sports (formerly Boom Fantasy) today announced the launch of PlayXFL, a free-to-play mobile gaming app that offers eligible fans the chance to win thousands of dollars in cash and other prizes each week during the 2020 season. Fans who download the PlayXFL app from the […]

With the aftermath of the end of alignment talks with the CFL settling in, many questions are springing up regarding the sustainability of the CFL and the PR strategy of the XFL. Could the CFL see a team jump ship to the XFL? Is the XFL hitting more bumps on the road to kickoff than […]