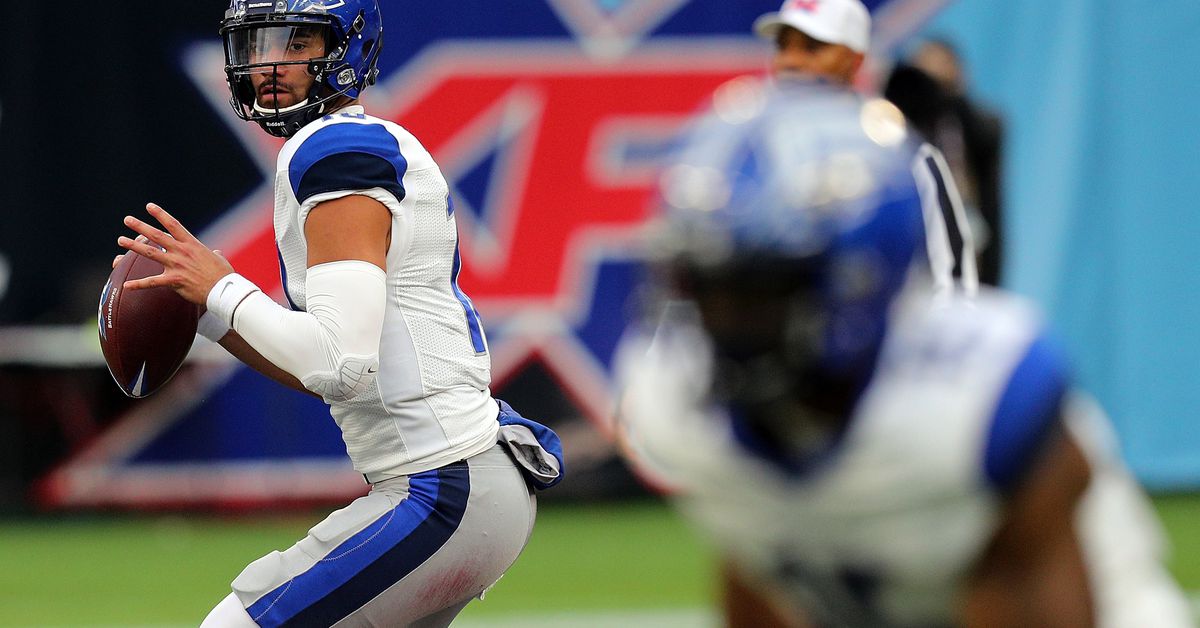 The St. Louis Battlehawks upset the Dallas Renegades in Dallas to kick off their franchise with a win using a run-heavy approach. Christine Michael got the start but was ineffective and lost a fumble, so Matt Jones, Keith Ford and quarterback Jordan Ta’amu rushed 21, 4 and nine times respectively. They ended up with 191 rushing yards and one touchdown on 42 attempts, while their opposition ran just 12 times.

Earlier in the week, the eight XFL teams released their Week 1 depth charts. In the NFL, the PR departments emphasize the depth charts are unofficial and don’t necessarily reflect what Sunday will show us. It’s not a big deal most of the time because we have a lot of history on these players and teams.

In the XFL, we have no such history. These teams were thrown together over the past two months, and so the depth chart is all we have to work with in assessing who is worthwhile in daily fantasy football and who will impact the point spread.

Now that Week 1 is a wrap, we can start to assess where the depth charts were accurate. Pro Football Focus has tracked the snap counts for the XFL, so we have a good starting point. We can compare St. Louis’ pregame depth chart with their snap count to figure out what to consider for Week 2.

QB Jordan Ta’amu, RB Matt Jones, WRs L’Damian Washington, Alonzo Russell, De’Mornay Pierson-El, and TE Marcus Lucas all put up the most snaps at their positions. All were listed as starters except for Matt Jones, who was Christine Michael’s backup. Michael ended up playing 23 snaps, gained zero yards on seven attempts and lost a fumble. Jones, on the other hand, played 48 snaps and ran the ball 21 times for 85 yards. He had one target, but dropped it while Michael caught his one target and went for negative one-yard. It looks like we have an early change at running back, but we’ll have to see how it plays out.

The team labels Marcus Lucas a tight end but PFF has him as a wide receiver. For DraftKings that doesn’t matter, as they have lumped all tight ends into the wide receiver pool, but it is odd to see four wide receivers playing big snaps on a run-first team. Lucas did run block on 28 snaps, so maybe PFF has it wrong.

After Michael and Jones, Keith Ford had six snaps, but made the most of them, rushing four times for 26 yards and a critical touchdown. If Michael does get sent to the dog house, Ford could see a step up in work.

With the run-first game plan, no receiver topped six targets or 64 yards, but none of the receivers had a drop and played efficiently. In a game where St. Louis is trailing by a bigger margin, they will likely need to get a little more air under the ball, which would be good for Washington and Pierson-El.

Defensive end Channing Ward was listed as a starter but played just 23 snaps but no singled player took over all of his snaps, as multiple players saw extra snaps. Overall, there wasn’t much change in the starters from the depth chart to the field. They held the Renegades to three field goals, which is a big win considering field position in the XFL. Punter Marquette King did have one of the better punt I’ve seen to help them get the win.

Overall, the BattleHawks held the Renegades to 267 total yards and 5.1 yards per pass as Phillip Nelson didn’t have a completion over 21 yards due to dinking and dunking all game. Getting Landry Jones back will likely help, but St. Louis did their job in Week 1.

St. Louis BattleHawks team president Kurt Hunzeker was recently interviewed on the 105.7 The Point’s “Rizzuto Show” to talk about the XFL. During the program, Hunzeker suggested that a new division of Adidas will be the manufacturer of XFL uniforms. He also added that helmets are being provided by Riddell and Schutt. Check out the […]