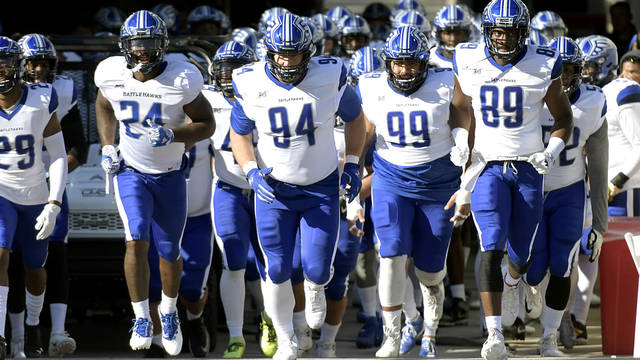 The XFL’s St. Louis BattleHawks will start their first season Sunday in Arlington, Texas against the Dallas Renegades. The team is shown at league a league practice scrimmage.

The XFL’s St. Louis BattleHawks will start their first season Sunday in Arlington, Texas against the Dallas Renegades. The team is shown at league a league practice scrimmage.

EARTH CITY, Mo. — Professional football is back at the former Rams Park in Earth City. And while the facility now houses the Lou Fusz Athletic Training Center, the signs of football are abundant in the main indoor portion of the building. The peeling old Rams stickers on the plastic trash cans are about the only signs of the NFL team’s stint there. But the sights and sounds of another pro grid tenant can be found.

The new XFL’s St. Louis BattleHawks have been using the training facility as they prepare for the first season of the spring football league, The BattleHawks’ season opener is Sunday at 4 p.m.at Globe Life Park in Arlington, Texas against the Dallas Renegades. The game will be televised on ESPN.

The BattleHawks, who will play their home games at the Ram’s old home stadium in the Dome at America’s Center, are the only XFL team in a city that doesn’t also have an NFL team.

The BattleHawks will play at Houston Feb. 18 and play their home opener against the New York Guardians Feb. 23 at 2 p.m.

The rest of the teams in the eight-team league include the DC Defenders, Tampa Bay Vipers, Seattle Sea Dragons and Los Angeles Wildcats.

The new league features rule changes and well as rosters coaches chosen for each team and hired by the league.

It’s the second try for the XFL, which ran for a single season in 2001, but didn’t continue. League owner Vince McMahon’s Alpha Entertainment. Former NFL quarterback Oliver Luck is the XFL commissioner. he’s the father of Andrew Luck.

The BattleHawks are led by head coach and general manager Jonathan Hayes, who was has coached tight ends for the Cincinnati Bengals and the University of Oklahoma. He played college football at Iowa and played in the NFL with the Kansas City Chiefs and the Pittsburgh Steelers.

“The XFL is its own entity. We understand that,” Hayes said. “We want to put players in a position to play their best.”

All eight XFL teams took part in league preseason workouts in Houston before departing for their home cities. Hayes said that situation was similar to that when he was with the Kansas City Chiefs.

“When I was in Kansas City, Hayes said, “we would train in River Falls (Wisconsin). It was called the Cheese League and we’d practice against the Saints, the Vikings, the Packers. We would see other teams, practice with them, get an idea what everybody would have.

“I think we in a really good situation,” he said. “You don’t have the OTAs as long as in the other league, though.”

The BattleHawks will feature former Ole Miss QB Jordan Ta’amu as he starting quarterback. Ta’amu was assigned to the BattleHawks on Oct. 15. At Ole Miss, where in 2018, he passed for 3,918 yards and 19 touchdowns and ran for 342 yards and six touchdowns.

The other two quarterbacks on the roster are Taylor Heinicke from Old Dominion and Nick Fitzgerald from Mississippi State.

In the backfield will be former Seattle Seahawks running back Christine Michael. Receivers will include Alonzo Russel, de’Mornay Pierson-El and L’Damian Washington.

At tight end, Marcus Lukas, a Mizzou product will start, while Wes Saxton and Cole Hunt figure to see action.

Defensive end Gimel President is an Illinois grad who has played with the Houston Texans and the Tennessee Titans.

Former Raider Marquette King is the BattleHawks punter, while Taylor Rossolino will handle the place-kicking duties.

Dallas, considered one of the league favorites coming into the season, are coached by former University of Oklahoma coach Bob Stoops.

Landrey Jones is listed first on the quarterback depth chart, but Philip Nelson and Eric Dungey are close behind.

Ah, the Alliance of American Football. For a short stretch in the spring of 2019, the AAF was the hottest thing since avocado pool floats. But the upstart football league tried to beat everyone to the punch, lacked funding, and folded without reaching the league’s playoffs in its first season. However, there’s one more league […]