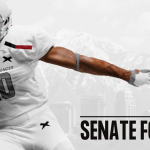 According to a report by KUTV’s Sara Knox, local organizations are looking into bringing professional football to Utah.

Jared Van Yperen is currently the team owner, and released a statement during a press release:

“[We want] to provide Utah with not only a professional sports team but also to prove that Northern Utah is big enough for major leagues to not only be profitable in Utah.”

The team currently plays in the Gridiron Developmental Football League (GDFL), and finished their season 7-1.

“Our organization is thrilled to be bringing another pro sports franchise to Southern Nevada. Just like the Vegas Golden Knights and the Henderson Silver Knights, the Vegas Knight Hawks will be a team built to support the community they play in. Our games at the all-new Dollar Loan Center will be fun, affordable and have the best-in-class in-game experience.”

The team boasts having former XFL and NFL players and coaches on their roster already and just made former NFL safety Aaron Wade their DBs coach, as well as a player in their secondary.

The post Professional Football Could Be Coming to Utah first appeared on XFL News Hub.

Many of you might have seen the social media updates for the Colorado Indoor football team, especially the naming contest. Recently, were we able to talk to Owner and team president Mitch Bascom about what led up to the decision to bring indoor/arena football back to Colorado, and how that has gone thus far. The…

Summer is here and things are moving on the original official XFL podcast! Get the details on the recent news about XFL 2020 players being affected by the bankruptcy, along with some excellent recap of Hal Mumme’s big Mega Bowl win in The Spring League! Also, how do you explain the XFL’s current situation to […]