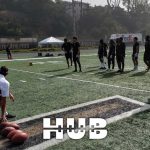 After creating a pathway for 18 to land NFL Training Camp roster spots, HUB Football is set to host its next free agent workout CAMP on Sept. 29 at Carson’s Dignity Health Sports Park

The CAMP presented by HUB Football, the preeminent audition stage for free agents looking to land coveted spots on NFL and other professional rosters, is set to host its next free agent workout on Wednesday, Sept. 29 at the Dignity Health Sports Park in Carson, just south of Los Angeles.

Founded by NFL agent Don Yee, HUB Football has become the go-to destination for free agent players. The majority of its participants are players who recently spent time with NFL teams, while others include recent collegiate players looking to land their first shot at making an NFL, CFL or other professional roster.

HUB Football hosted its first four CAMPs of 2021 in San Diego and this is the first one to take place in the Los Angeles market. Besides the 18 recent participants who earned their way onto NFL training camp rosters, another 14 from the HUB Football Class of 2021 landed contracts in the CFL.

In addition to the on-field work that will take place on Sept. 29, The CAMP presented by HUB Football is also offering a scouting camp for aspiring professional scouts. Hosted by long-time professional scout Russ Lande, the current director of U.S. scouting for the Montreal Alouettes, the scouting camp will feature a training seminar on Tuesday evening, Sept. 28 at the DoubleTree by Hilton Hotel Carson where attendees will learn the ins and outs of the scouting world, while also receiving training in creating scouting reports. And the following day on Sept. 29th, participants in the scouting camp will have an opportunity to attend The CAMP workout and put their scouting skills to the test.

The CAMP presented by HUB Football was created by Yee as a pathway and opportunity for aspiring pro athletes to show off their skills for talent evaluators from the NFL and other professional leagues, including the CFL. CAMPs are not combine-style workouts, but rather they are designed to mimic workouts that take place routinely at NFL facilities across the country. Players do individual work with position coaches, while also competing in one-on-one and team-style drills. Since its inception in 2019, roughly half of the teams in the NFL have attended CAMPs to scout free agents in-person, while nearly every CFL team has been represented. In addition, film from all CAMPs is sent to more than 800 NFL and CFL talent evaluators, along with scouting professionals from other leagues.

The CAMP is unique in that it limits its roster to 60-65 players, ensuring that only the best-of-the-best receive an invitation to participate. Players pay a small registration fee to attend, and they have an option to purchase a copy of their film from the day, film which again is distributed to every NFL and CFL team. Players pay their own travel costs, but the results have spoken for themselves. Since HUB Football launched The CAMP in 2019, a total of 352 players have suited up and 70 have gone on to sign professional contracts, an impressive 19.9 percent. And a number of those 70 players have signed with more than one team, resulting in a net total of 102 contracts signed by HUB Football alums.

For more information about The CAMP presented by HUB Football, including the scouting camp, visit https://www.hubfootball.com.

Find out which XFL ballers will now be playing fall football as Alan and Bryant discuss which might end up having the most success. Source