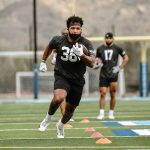 Williams will be tasked with helping HUB bolster its working relationships with the NFL and CFL teams, and he’ll work closely with HUB Football Senior Vice President of Operations, Tom Goodhines, to ensure that the best available free agent players are being identified and recruited to participate in HUB’s CAMPs.

“Mike has a keen eye for identifying talent and he had a long and distinguished career in the NFL with both the 49ers and the Rams, one that includes a Super Bowl season with San Francisco in 2013,” said HUB Football CEO Jamie Hemann. “His hiring will only help solidify our standing as the preeminent destination for free agent players looking to make their way onto rosters in both the NFL and CFL.”

Williams spent a total of 15 seasons with the 49ers over two stints, working in a variety of capacities. He spent 10 seasons (1999-2008) as a Pro Scout, Area Scout and Personnel Assistant before leaving in 2009 to become the Vice President of Player Personnel and Pro Director for the St. Louis Rams.

He spent three seasons (2009-11) with the Rams before returning to the Bay Area in 2012 to serve as a Pro Director and Pro Scout for the Niners, where he’d remain for five more seasons (2012-2016). During that time, the 49ers played in the Super Bowl following the 2013 season and the NFC Championship following the ’14 campaign.

The CAMP presented by HUB Football was created by Don Yee in 2019 as a pathway and opportunity for aspiring pro athletes to show off their skills for talent evaluators from the NFL and other professional leagues, including the CFL. A rolling series of one-day workout camps, HUB Football has attracted more than 350 players to work out for scouts from the NFL, CFL, USFL and USA Rugby.

CAMPs are not combine-style workouts, but rather they are designed to mimic workouts that take place routinely at NFL facilities across the country. Players do individual work with position coaches, while also competing in one-on-one and team-style drills. Since its inception in 2019, roughly half of the teams in the NFL have attended CAMPs to scout free agents in-person, while nearly every CFL team has been represented. In addition, film from all CAMPs is sent to more than 800 NFL and CFL talent evaluators, along with scouting professionals from other leagues.

CFL Commissioner Not Ruling Out More Talks With XFL

In a recent report by Dan Ralph of The Canadian Press, CFL Commissioner Randy Ambrosie says he hasn’t shut the door on resuming the talks with the XFL. Talks between the 2 leagues broke down mutually in July, just before training camp was to begin, but Ambrosie had this to say in a recent press […]

Trestman: “We’ll make a decision at gametime. Whoever starts doesn’t really matter because they’re both going to be in the game.” Source

Let’s talk about “The Quota” – A CFL team may dress up to 44 players, composed of 21 “nationals” (essentially, Canadians), 20 “internationals” (almost exclusively Americans), and 3 quarterbacks. Around 50% of the players need to be Canadian. Okay so what does that mean? And why were the Canadians so freaked out about losing the…