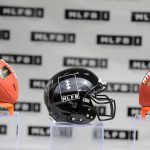 In their most recent 10-Q filing, CEO Frank Murtha released the names of 4 more members executives hired by the league. These references came directly from the league’s filing:

Steve Videtich – Assistant to Director of Football Operations/General Managers – With over 20 years of experience working as or with professional football players in the AFL, Steve brings a unique skill set to the Company.  Having played for 13 years in the AFL then working both in the league and team front offices, Steve understands the challenges involved with managing a professional sports organization.

TSN’s Dave Naylor returns to the show to discuss everything that may have caused the XFL/CFL alignment talks to be called off. From the conflicting philosophies amongst CFL owners to the XFL’s plan for 2023 not being quite clear yet, you’ll get every angle covered on this most interesting and bizarre twist we have taken […]

This week a prominent CFL QB came out in favor of a merger between the CFL and the XFL! Also, as sports wagering is legalized more and more from state to state and soon in Canada, how well does this bode for the future of the XFL as a sustainable league? Does this even help […]