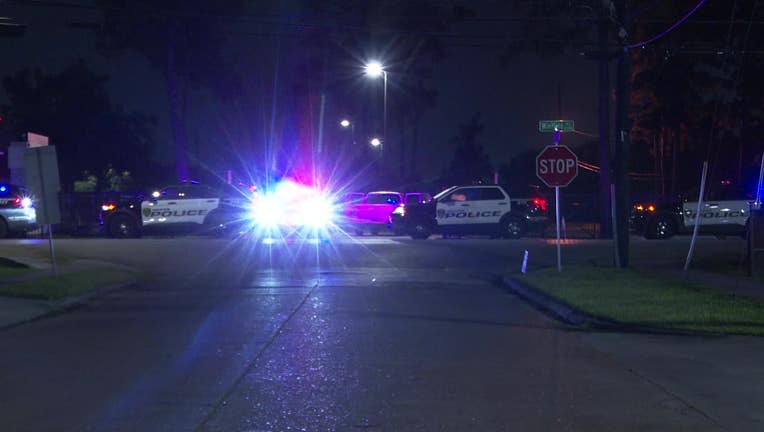 Police say a pickup truck drove to a school parking lot after someone fired shots at the vehicle.

HOUSTON – Police say a passenger in a pickup truck was shot and killed in northeast Houston after a group of suspects in another vehicle followed the pickup truck from a gas station.

The shooting occurred near the intersection of Winfield and San Lucia River Drive around 11:30 p.m. Monday, but police believe the incident began at a gas station on E. Mt. Houston Road.

Police say the pickup truck left, but the other vehicle apparently followed them to the intersection where the shooting occurred. Authorities say someone in the front passenger seat of the suspect vehicle opened fire on the pickup truck.

The pickup truck fled to a nearby school parking lot and stopped. HPD and HFD responded to the scene.

Police say a backseat passenger in the pickup truck was struck by the gunfire. The man, 42, was pronounced dead at the scene.

The suspects are described only as three Hispanic males and one Hispanic female in a white, four-door Toyota.

Apparently the new XFL’s D.C. Defenders love them some Ohio State Buckeyes. First, we had news of former quarterback and national title winner Cardale Jones being assigned to the team before the draft began. Then, once it commenced, the Defenders proceeded to pick two more former Buckeyes. Former offensive lineman Chase Farris went off the […]

Why does a Houston neighborhood have no streets or sidewalks?

An Isiah Factor viewer reached out with a shocking question: why doesn’t my neighborhood have streets? Isiah talked to people living there, as well as the city, to find out how something like this can exist. By Isiah Carey Posted June 11 Facebook Twitter Print Email FULL STORY