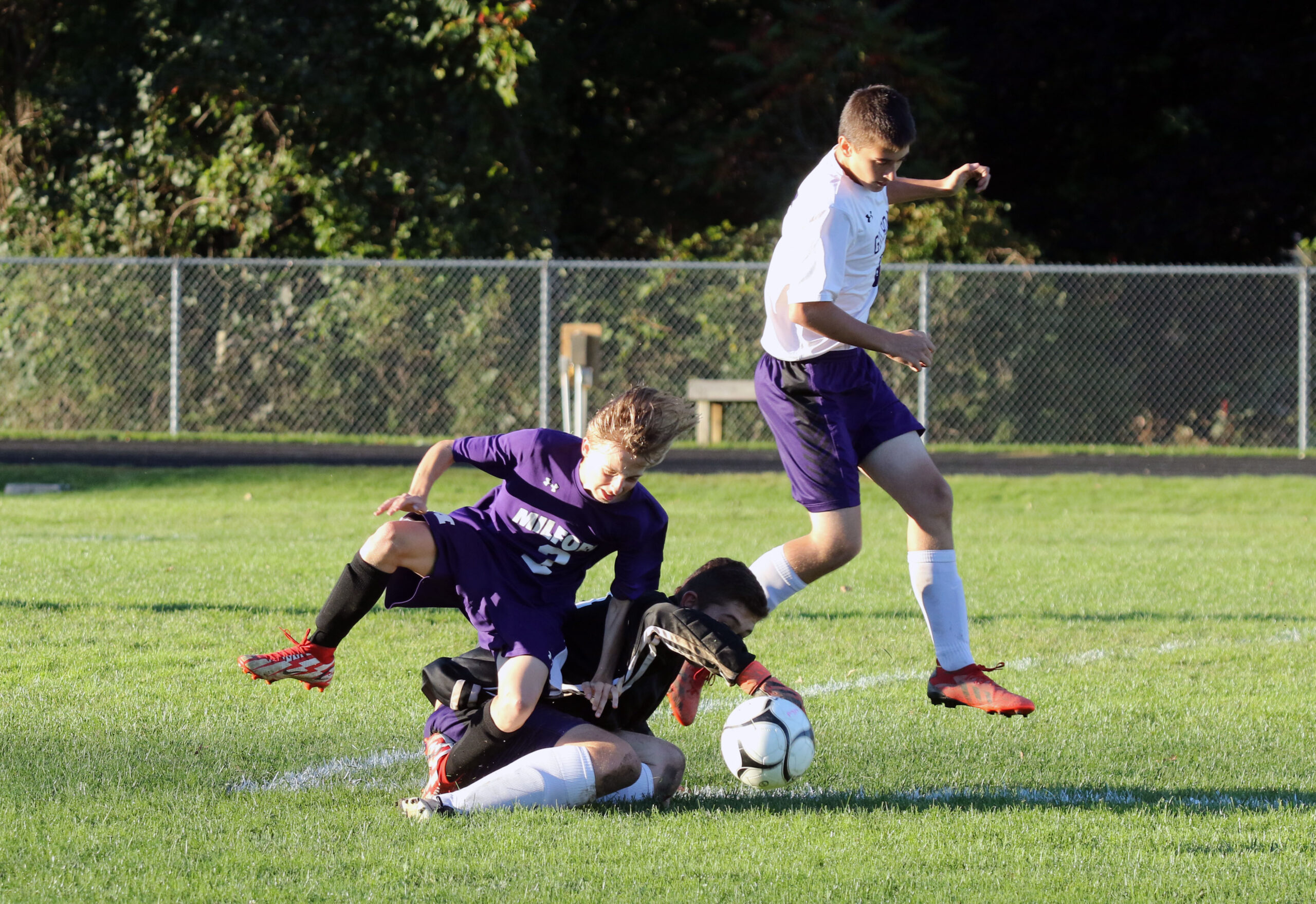 Milford/Laurens’s Donta Sherwood gets knocked off his feet by Gilboa goalie Joe Willie who came off his line to get the ball during a non-league game Friday. Sherwood scored a goal to help M/L to a 3-2 win. (Cheryl Clough).

Competiello had two goals and an assist in the game.

Shawna Whiteman and Val Beardslee had the other goals for Schenevus (9-0, 6-0), which also got an assist from Hannah Sulas.

In Milford, the twin Cats got goals from Justin LaPilusa, Brock Mann* and Nick DeBoer in a non-league win over visiting Gilboa.

Dylan Merwin scored for Gilboa, which got 16 saves from keeper Joe Willie.

* Originally this goal was credited to Donta Sherwood, but team officials reviewed the play and awarded the goal to Mann.

In Franklin, Matthew Serrao had three goals and an assist as the combined Franklin/Unatego team stayed unbeaten with a Tri-Valley League win over Worcester.

Chase Birdsall had two goals and Jacob Kingsbury and Nick LeFever scored the other goals for Franklin/Unatego.

Brandon Gregory, Braeden Johnson and Victor Rodriguez-Matias had assists for Franklin-Unatego (7-0-1, 4-0), which established itself as the team to beat in the TVL with wins over the Wolverines and Milford/Laurens this week.

In Richfield Springs, the host team again had to forfeit because of a lack of players, giving Morris its first TVL win of the season.

In Otego, Kylie Mussaw scored twice and got an assist and Lilyanna Barnes scored twice as the Spartans stayed undefeated with a Midstate Athletic Conference win over Greene.

Andrea Trifunovic scored for Greene on a pass from Cassie Butler.

Carissa Richards scored the other goal and had an assist for Morris (5-4, 4-3), which also got an assist from Maiya King.

At Cooperstown, the visiting Lions stayed undefeated with a win against the host Hawkeyes in a non-conference game.

In Middlefield, visiting Whitesboro topped the host Hawkeyes in a Center State Conference meet at the Clark Sports Center.

In Watkins Glen, the combined Watkins Glen/Odessa-Montour team gave Oneonta its first loss of the season.

Last week’s Seahawks Q&A brought so many great questions that we split it into two parts. If you haven’t read part one, which covers contract questions for DK Metcalf and Quandre Diggs, check it out here. Jake & Stacy: Four important Seahawks player decisions this offseason This week’s Seahawks Q&A covers slow starts for defense, […]

Monks have come a long way in terms of their development and power as a class, especially in Dungeons & Dragons 5th edition. Where they used to be thought of as an underpowered class in D&D, they’re now a unique and entertaining class to play–as long as players know how to build their monk for best […]

Digital divide: Washington families struggle to get internet access Getting more people online is a priority in Olympia, especially as schools consider sending students back to remote learning. SEATTLE – As COVID-19 prompts a return to remote learning for school districts across western Washington, there’s an even greater urgency to close the digital divide. There […]