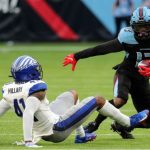 The Falcons have announced that they have waived/injuredWR Jeff Badet.

Although worded strangely, as it comes to waivers due to injury, this is a positive distinction. Should Badet clear waivers, he reverts back to Atlanta’s IR. Which means he could be available to the team in 2021.

Badet began his college career at the University of Kentucky before transferring to Oklahoma. Afterwhich he went undrafted, but signed with the Vikings.

In 2020, he joined the Dallas Renegades where he finished the pandemic-shortened season with 16 catches for 108 yards.

Baset signed with Washington after the XFL season ended, and was elevated to the active roster 3 times as the signed wound down. He signed a futures deal with the Team in January, but was waived in May.

The hope is the speedy receiver can get healthy and contribute in the return game for the Falcons.

The Dallas Renegades went down in their opener to the St. Louis BattleHawks 15-9. Source

Many of you might have seen the social media updates for the Colorado Indoor football team, especially the naming contest. Recently, were we able to talk to Owner and team president Mitch Bascom about what led up to the decision to bring indoor/arena football back to Colorado, and how that has gone thus far. pic.twitter.com/DinZfzwme4 […]

Take a unique look at each week of the XFL season that was with this reimagined yearbook recap episode! If you followed along all season long, you won't want to miss this one! Source