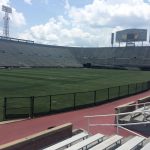 According to multiple reports, the USFL is set to return to Birmingham as a seasonal Hub site in 2022, which would begin on April 25th, and run through July 3rd.

On June 3rd, just before The Spring League wrapped up it’d season with its championship, it was announced by the TSL brass that the USFL would return for 2022.

And then radio silence. Rumors about which cities would be part of it, a search for team owners, and former executive director, Steve Ehrhart made a statement. But outside of that, there hasn’t been much real news about the league since.

In August, CEO Brian Woods claimed September would be the month when news would start rolling out. Today, October 11th, the first bit of actual news since the announcement has arrived.

According to a tweet by Chris Breece of CBS 42 WIAT out of Arkansas, there are talks of the league using Birmingham, AL as a Hub city, similar to what The Spring League has done in the past.

The southern city used to house a USFL Team, The Stallions. The team played there between 1983 and 1985, finishing with a 38 – 20 record over those 3 seasons, making the playoffs twice.

Housing for the players of the 8-team league could cost upwards of $15M for the season, and use almost 50,000 hotel rooms. This would be a monster boon for the city that had recently been left to pick up the pieces the AAF left behind.

A story on the news site, said Tad Snider, Executive Director of the Birmingham-Jefferson Civic Center Authority said this in a statement:

“There’s a good opportunity here, and we are going to keep looking at it and how it benefits the city. That’s what we’re going to be doing over the next few days.”

Birmingham’s WVTM reporter Jon Paepcke elaborated of the earlier report with his tweet, saying the games could be split between Fox, NBC, and the USA Network.

He also said that they could be split between fields as well, mostly at Protective Stadium, the rest at Legion Field, where the AAF’s Iron played its games.

The talks are ongoing, and nothing definitive has been announced, but this is the biggest piece of news to come out about the league since its announcement.

Stay with us as it unravels.

The post Birmingham Announced as a Site for the USFL in 2022 first appeared on XFL News Hub.

What are they talking about!? This week the original official XFL podcast is back to speculate on what actually is being discussed between the XFL and the CFL. Also, Alan and Bryant debate what a potential new timeline for a 2023 kickoff will mean for decisions and announcements for the XFL. Get the latest on […]