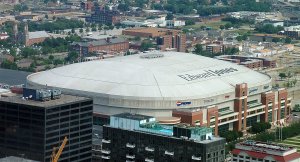 The St. Louis BattleHawks are the biggest favorite on the board this week as they’re -10 at home versus the New York Guardians. Photo by Kelly Martin (Wikimedia).

The New York Guardians are coming off of a disastrous showing in Week 2.

The 27-0 loss came at the hands of the DC Defenders, who are among the best teams in the XFL, so it might have just been a bad week. We’ll find out more when they visit the St. Louis BattleHawks on Sunday.

The XFL wanted to get more in-game interviews from players (to differentiate itself from the NFL) and it got exactly what it wanted in Week 2 when Guardians quarterback Matt McGloin ripped the coaching staff and game plan going into halftime.

In fairness, he was mostly right as the team lost 27-0. However, the coaching staff was livid.

On the day, the Guardians finished with just 137 yards of offense, with a total of just five first downs while McGloin was just 8-of-19 for 42 yards, no touchdowns and two picks.

Some might look back to Week 1 and think that this was an off week but it really wasn’t. This is not a good team.

In Week 1, the Guardians beat the Tampa Bay Vipers 23-3 but the Vipers are one of the worst teams in the XFL. Even in that win, the Guardians were out-gained 394-226 and 19-11 in first downs. New York has just 16 first downs on the season. Week 2 wasn’t a one-off; this is a bad unit all the way around.

While the Guardians were overrated after their Week 1 performance, maybe the BattleHawks were underrated. When they beat the Dallas Renegades 15-9 in Week 1, many felt that it was more of a Dallas letdown than a St. Louis win.

In Week 2, they had a hard-fought 28-24 loss to the Houston Roughnecks, who look like one of the top teams.

It’s worth noting that the BattleHawks out-gained the Roughnecks 390-238 in Week 2 and probably lost because they lost the turnover battle 2-0. They were great in many aspects, converting 11-of-19 third downs, completing 30-of-37 passes and running nearly double the offensive plays (83-49).

I really like what I’ve seen from quarterback Jordan Ta’amu, who has now completed 50-of-64 passes on the season for 493 yards, four touchdowns and two picks. He’s also compiled 109 rushing yards so far. He’s easily been one of the top passers in the league so far and he should lead his team to a win on Sunday.

I’m not going to ride with the Guardians as they look like a bad team and now have locker room issues. On the flip side, St. Louis looks like a quality team on both sides of the ball and has a competent quarterback in Jordan Ta’amu, who might be one of the more underrated players in the league.

On top of that, St. Louis is playing its first home game and remember, the St. Louis Rams moved to Los Angeles a couple of years ago. The game is a sellout, so it’s going to be a packed house on hand watching the Guardians get battered and bruised.

Back in the metropolitan area, the New York Guardians revealed the first 52 names to don their uniform in a regular-season game on Monday. The New York Guardians, along with the rest of their XFL brethren, unveiled their first 52-man roster as opening weekend nears. With training camp in Houston concluded, the Guardians have returned […]

Mike Mitchell gives an update on Week 2 of the Guardians training camp. Source